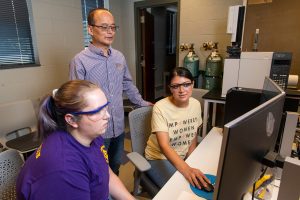 Although cannabis testing is an eternal subject in the Bachelor of Science in Forensic Chemistry program at the Department of Chemistry at Western Illinois University, it was recently revitalized by a grant of $ 160,181, awarded by the National Institute of Justice (NIJ) and Registration Certification (COR), presented by the Drug Enforcement Administration (DEA).

In the Federal Controlled Substances Act (CAS) of 1970, cannabis was classified as a “Schedule 1” substance, which made the cultivation and use of cannabis illegal. Since then, cannabis has become the most widely used illegal drug in the United States; and cannabis testing represented the bulk of the work in most forensic laboratories.

Botanically, cannabis has two main species commonly referred to as marijuana and hemp. Marijuana is a mind-altering drug and hemp is used to make many consumer products, from fibers to edibles, which are characterized by low levels of THC and high levels of cannabidiol (CBD), a non / antipsychoactive compound with recently accepted medical use.

Cannabis plants exert psychotropic effects when the THC concentration is around 1 percent. In December 2018, Congress enacted the Farm Bill 2018, which excluded hemp from the legal definition of cannabis.

Currently, there is an urgent need for validated methods to measure the total concentration of THC in various cannabis products by criminal laboratories. With the grant from NIJ, Associate Professor of Forensic Chemistry WIU Liguo Song and his students will validate a method using LC (liquid chromatography) coupled with DAD (diode array detector) and ESI / MS / MS ( Electrospray Ionization Tandem Mass Spectrometry) for precision measurements for a wide variety of cannabis products such as dried flowers, concentrates, edibles and topicals, for a total of 68 different sample types.

“Our research will be based on the newly acquired Agilent 6545 QTOF LC / MS system,” Song said.

The instrument was funded by the National Science Foundation (NSF) on July 30, 2018 and is housed at the Western Illinois Mass Spec Center at Currens Hall, Room 311, under the direction of Song.

“We are delighted with this award because it recognizes not only our research, but also our educational abilities,” Song said. “The scholarship includes funds to help two graduate students and two undergraduates with summer research in 2021 and 2022. He also 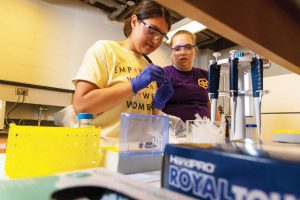 includes funds to help two students attend the American Academy of Forensic Science (AAFS) annual meeting in the spring of 2022. The department, college and WIU’s commitments to undergraduate research have really helped us to get the price.

As the medical and recreational cannabis markets continue to grow, many academic programs relating to cannabis have sprung up across the country, including two cannabis-related miners at WIU, Cannabis and Culture and Cannabis Production.

“Although marijuana is now legal in the state of Illinois, it is still illegal federally. To conduct research on marijuana, we must register with the DEA. Song said. “Now that we have a COR, presented by the DEA, our students can gain hands-on work experience with marijuana, which will open up new career opportunities for them. “

A bonus of the research, Song added, is that it provides opportunities for local farmers.

“The Western Illinois Mass Spec Center sincerely invites the cannabis industry in the state of Illinois to collaborate in the field of cannabis testing solutions,” said Song. “In addition to precise activity testing, the West Illinois Mass Spectrometry Center is also able to cover a range of other applications, such as terpene profiling and contaminant testing for them. residual solvents, pesticides and mycotoxins.

For more information on the BS Forensic Chemistry program at WIU and the Western Illinois Mass Spec Center, visit wiu.edu/cas/chimie/forensic.php or wiu.edu/mass_spectrometry/.

Sean Leary is an author, director, artist, musician, producer and entrepreneur who has written professionally since his debut at the age of 11 in the pages of the Comics Buyers Guide. A graduate with honors from the University of Southern California’s master’s program, he has written more than 50 books, including best-selling books The Arimathean, Every Number is Lucky to Someone, and We Are All Characters.