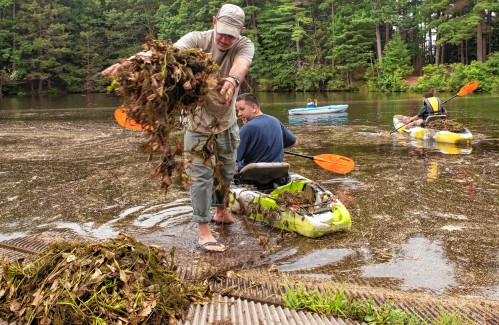 EASTHAMPTON – Invasive water chestnuts and milfoil are making a reappearance in Nashawannuck Pond, prompting herbicide treatments and volunteers to step up and remove half of a water chestnut van on Saturday morning.

According to Paul Nowak, chairman of the Nashawannuck Pond Steering Committee, water chestnuts and milfoil have long been a nuisance in the pond, and plants are taking hold again this year.

The weeds in the pond “make the pond less beautiful for the general public,” Nowak said, “and this has hampered recreational activities such as fishing, kayaking and canoeing.”

Additionally, large amounts of pond weeds can deplete oxygen from the water, he said, harming fish.

Invasive species can enter the pond in a number of ways. Plant seeds sometimes attach to boats and their trailers, or can be carried from one body of water to another by ducks, geese and waterfowl.

“If too many – particularly invasive – weeds fill the pond, they will take over and eventually turn it into a swamp if left unchecked,” said Beth Tiffany, member of the steering committee.

In 2002, volunteers removed nearly 10 tonnes of water chestnuts from the pond.

The situation is not so extreme this time around, with water chestnut growth appearing to be in its infancy, according to Nowak. When the plants are seen, “you want to pick them right away,” he noted.

Water chestnuts are to be removed by hand, with volunteers working from kayaks and canoes.

Last week, the city treated the pond with herbicides targeting water milfoil. The pond was also treated in 2016, 2017 and 2019.

In 2010, the pond was drained and dredged as part of a $ 2.3 million project, eliminating “years of sediment and weed growth,” according to the steering committee, and “allowing a canal deeper and cooler designed to prevent weed growth and encourage natural habitat enhancement for fish and other species.

As pond weeds continue to grow in the water, Nowak said, their prevalence would be worse without dredging.

“When you deepen the pond, the light is less likely to reach the bottom,” Nowak said, “and the plants need light to grow.”

Nashawannuck Pond originally covered about 50 acres when it was established in 1847, but has lost about 20 acres in area to sediment runoff throughout its history. The 2010 dredging removed over 40,000 cubic meters of sediment, mainly increasing the depth of the pond.

The steering committee attracted many volunteers when it appealed for help for water chestnuts this year on its Facebook page, Nowak said. Valley Paddler Rentals also offered the use of its boats.

The pond “is the icon of our town,” Nowak said, “and borders Nonotuck Park, providing wonderful access to people and water… We welcome any help we can muster.”