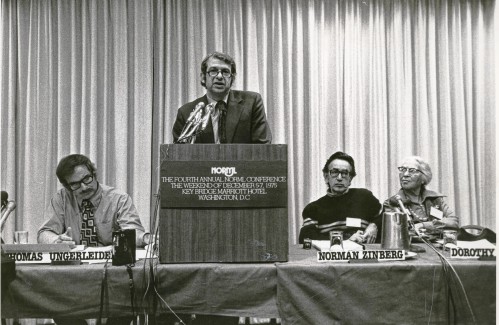 AMHERST — A pioneer in the effort to decriminalize marijuana. A dedicated advocate of nuclear arms control. A brilliant psychiatrist and omnivorous learner who, as one admirer put it, “applied science to questions of social justice.”

And, in the words of an angry Richard Nixon, a “clown” who needed a bad slap in the face for his efforts to reform the country’s marijuana laws.

Last Friday, at a one-day forum at the University of Massachusetts Amherst, friends, family members and a wide range of doctors, lawyers and drug and health experts come together to honor the late Lester Grinspoon, the late Harvard Medical School psychiatrist, professor and writer who rose to prominence – and controversy – for his arguments for the legalization of marijuana and its potential health benefits , at a time when many saw pot solely as the province of hippies.

At “Lester Grinspoon Reconsidered: Celebrating a Pioneer of Drug Policy and a Legacy of Social Change”, two of Grinspoon’s sons remembered their father as an eternally curious man, who read a lot on different subjects, loved the natural world and was never dogmatic. on his opinions.

On the contrary, said David Grinspoon, his father was always ready to change his mind if he learned something new – even if he used his own training and education to push forward changes in American society.

“I consider my dad the smartest person I’ve ever known,” said Grinspoon, an astrobiologist. “And he was never afraid to speak truth to power.”

Friday’s forum, held on the 94th anniversary of Lester Grinspoon’s birth in Newton (he died in 2020 aged 92), was organized by the Special Collections and University Archives and Research Center ( SCUA) and the UMass Amherst libraries. (Grinspoon’s papers are now archived at SCUA.)

The symposium featured a number of panel discussions on past and current US drug policies, as well as a keynote address by Carl Hart, a professor of psychology at Columbia University, who has written and spoken extensively. drug use and policy.

The event kicked off in an often fun but also heartfelt way with presentations from David Grinspoon and his brother Peter, a physician and cannabis specialist at Massachusetts General Hospital who has also written about addiction. Both remembered growing up in a vibrant home where “the brightest and most progressive minds of the day” were often invited, said Peter Grinspoon – including his father’s good friend and Harvard colleague, astronomer Carl Sagan.

Lester Grinspoon himself grew up in a home with very little money, the brothers said, and actually left high school early to join the Merchant Navy. But he later graduated from Tufts University and then Harvard Medical School, entirely on scholarship. “He might have been the only high school dropout to graduate from Harvard Medical,” joked Peter Grinspoon.

Their father was also an early opponent of nuclear weapons, the brothers said, and he approached the issue from a psychological angle, fearing that all the ‘duck and blanket’ drills the children had been forced to do. in schools following the Cuban Missile Crisis in 1962 were simply scaring children. He was a founding member of Physicians for Social Responsibility and also testified before Congress about the dangers of the arms race, the brothers noted.

But Grinspoon gained wider prominence beginning in 1971 with the publication of his book “Marihuana Reconsidered”, in which he refuted evidence of the drug’s supposed dangers and suggested that punitive laws for its use were more a function of political repression than of public health.

This earned Grinspoon a rebuke from, among others, President Nixon, who according to a number of reports was enraged by a favorable review of Grinspoon’s book in the press; he circled Grinspoon’s name around the room, scribbling on the margins “that clown is way off to the left.”

But as Peter Grinspoon recalled, his father’s response on hearing about the incident years later was that “it was an honor to be called a clown by a crook”.

In “Marihuana Reconsidered”, Grinspoon also overcame his own initial mid-1960s belief that pot was actually a dangerous substance. “He wasn’t afraid to question his own assumptions,” said David Grinspoon, adding that his father started using the weed recreationally later in life.

Today, as the pot industry seems to grow every day, his father’s push to legalize the drug seems particularly prescient, David noted: “Every time I see a dispensary, I think of my father.”

Lester Grinspoon also spoke out against harsh sentencing for cocaine use in the 1980s at the height of the Reagan administration’s “war on drugs” and became an early advocate for medical use. marijuana when another of his sons, Daniel, was stricken with leukemia as a teenager. Before he died, Daniel got some pain relief by using marijuana, his father later said.

Although he became a popular and public figure as a result of “Marihuana Reconsidered” and his other works, Grinspoon was also marginalized at Harvard, noted Peter Grinspoon, due to his views; he was never made a full professor despite a long career there and numerous publications to his name.

That made the decision to give his father’s papers to UMass quite easy, Peter said, when former SCUA chief the late Robert Cox first made contact with the family about 15 years ago.

Aaron Rubenstein, the current director of the SCUA, said in a brief interview on Friday that Lester Grinspoon’s efforts to reform national drug laws also speak to the broader movement to end overly harsh sentencing, mass incarceration and systematic racism in the United States.

“He understood how all of these things were connected, which is also a passion of mine,” Rubenstein said. “It makes the presence of his papers in our collection truly special.”

Peter Grinspoon said Harvard contacted him about eight years ago about preserving his father’s papers. he must have told college that his family was already working with UMass and that “we were really pleased with the work they did.”

Steve Pfarrer can be contacted at [email protected]