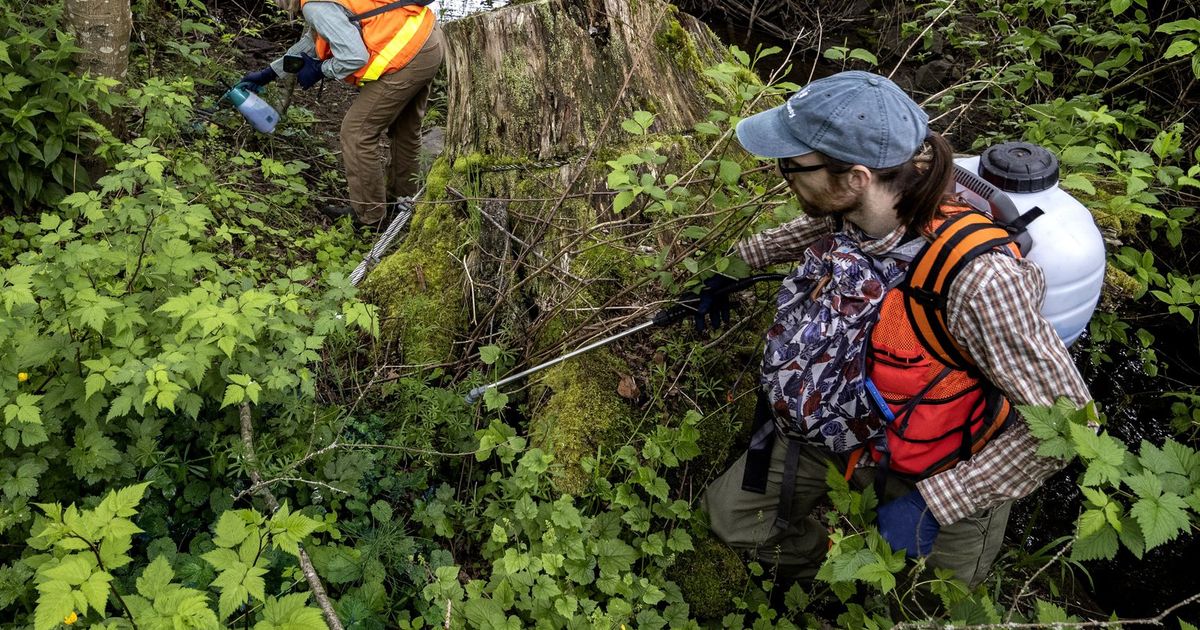 But there is an intruder in the middle.

A strip of bright green, kidney-shaped veined leaves around a central stem, with rounded serrated edges. It’s early in the season, so they’re still short. But they have spread widely.

This is garlic mustard, a Washington State Class A noxious weed. Left to his own devices, he will take over this bank. It will spread like wildfire. He will win the battle for soil, for nutrients, for light, for space. It will release phytochemicals, disrupting the relationship between the roots of other plants and the beneficial fungi in the soil, making it even more difficult for other plants to grow.

Its seeds, which can survive 10 years, will spread further, carried on foot, by the wind, by flood waters.

It will smother the harmonious ecosystem that thrives here.

Washington has 38 species of Class A noxious weeds — invasive plant species that have taken hold in the state and, if left to spread, would threaten local crops, ecosystems and habitats. Washington has laws to control noxious weeds that were passed before Washington became a state. All but one county has its own noxious weed control chart to monitor new weeds and help limit their spread.

It’s a never-ending battle, not entirely pointless, but where victories are usually temporary and unrecognized, while losses are permanent and show up on every available inch of soil across the state.

The story of the first weed declared in Washington is emblematic of the difficulty in controlling their spread.

Canada thistle, a weed with spindly purple flowers native to southeastern Europe, likely arrived in North America in the 1600s in a contaminated seed lot or in ship’s ballast.

It spread quickly. Its roots can spread up to 12 feet per year, each plant can produce up to 5,000 seeds, and the seeds can survive for 22 years. It creates dense clusters that crowd out native plants and crops.

In 1881, the Washington territorial government passed its first noxious weed law, in an attempt to control the spread of Canada thistle.

Today, 140 years later, Canada thistle is a Class C noxious weed in Washington. The lower class does not mean that it spreads slower or is less harmful than class A or class B weeds. On the contrary, it essentially means that the battle has been lost.

All noxious weeds are invasive and harmful. Class A weeds are still very limited in their spread, so to try and keep it that way they have the highest priority. Counties and private landowners are required by law to eradicate Class A weeds. Class B weeds are prevalent in some parts of the state, but still limited in others. The counties are trying to contain them. Class C weeds are everywhere.

“It’s counterintuitive, you see, ‘Oh my God, they’re everywhere, we have to do something,'” said Janet Spingath, the Western Washington representative on the Noxious Weed Control Board of the ‘State. “We would like to eradicate them, but it’s just not possible.”

The board updates the state’s noxious weed list annually, with public input, scientific review, debate and voting. There are currently 155 state-designated noxious weeds in all three classes.

Some are tasty. The blackberry bushes blocking the path with an impenetrable thicket of thorns? Harmful weed.

Some are pretty. The Scotch broom, lighting up highway hills with fiery yellow flowers? Harmful weed.

All are invasive. All pose an economic or environmental hazard if allowed to spread too widely.

Scotch broom, with its bright yellow sweet pea-shaped flowers, forms dense stands of brush. It outgrows young trees and can be poisonous to livestock. In 2017, the state estimated it as the second costliest noxious weed in Washington, with the potential to cause $143 million in annual agricultural and timber losses if allowed to spread unabated. It is a class B weed and is prevalent throughout western Washington.

Each plant produces thousands of seeds and each seed can remain viable for decades. Once it has a foothold, it is terribly difficult to move it.

“I tell people, if you have it, your kids will have it,” said Sayward Glise, a noxious weed specialist for King County.

The costliest estimated noxious weed, with a potential of $149 million in annual losses, is skeleton rush, a wiry, branching plant with small, yellow daisy flowers. It is widespread in eastern Washington, where it threatens wheat, potato and hay crops.

But there are also successes.

Kudzu, the so-called “vine that ate the south,” was discovered in Clark County in 2005 as a five-alarm fire in the noxious weed community.

Kudzu can grow up to a foot a day, notoriously gobbling up parked cars and knocking down power lines. And, as the climate warms, Washington only to become more hospitable.

“Green, senseless, unkillable ghosts”, poet James Dickey writing from the vine. “In Georgia, the legend says / That you have to close your windows / At night so that he doesn’t come into the house.”

But in Clark County it was quickly controlled with herbicides, eradicated and has not been reported in Washington since.

It remains a class A weed.

“If something is only in one place, it just pops up, we’re going to make that the top priority because we probably have a good chance of not letting it spread in the state,” Spingath said.

For Glise, noxious weeds have a way of creeping in even in her non-working hours.

During a trip to New York, she went for a walk in Brooklyn’s Prospect Park, the urban oasis designed 150 years ago by Olmsted. Oh oh, she thought, there’s a square of garlic mustard.

A friend told him he was planning to honeymoon on the Raging River, a tributary of the Snoqualmie.

“I was like, ‘Don’t go, there’s knotweed everywhere,'” she said.

They fan out in a search-and-rescue-style grid, eyes downcast, scanning the natural mosaic for leaves that don’t belong. On these King County shores, they primarily seek out garlic mustard (in spring and early summer) and Japanese knotweed (later in the season).

They carry spray bottles of imazapyr, a bright blue chemical herbicide. Imazapyr works by blocking the production of a necessary plant enzyme, which is not found in animals. We think it is relatively low risk. Yet it is a herbicide. The team must weigh the risks of its use against the damage caused by the proliferation of garlic mustard or the potential erosion caused by digging large sections of bank.

“The herbicide may be the softest tool in the toolbox,” Glise said. “We try to disturb the environment as little as possible.”

If the plants are still young, they will receive a spray of herbicide; if they go up (produce seeds), they should be pulled by hand and put in a garbage bag.

The team will map where they went and what they found in the smartphone apps, both so they don’t duplicate their efforts and so they can check for trouble spots in future years.

Just over a kilometer downstream from where the team is working, Glise shows the opposite shore, a bucolic scene: willow trees, a rocky beach, gently flowing water.

Ten years ago, everything was just knotweed.

The team will travel 150 miles of river this year, arriving at hard-to-reach spots by inflatable kayak.

Since the weed control program began researching garlic mustard in 2000, the total area of ​​the weed has been reduced by 64 percent, according to the county. most recent annual report.