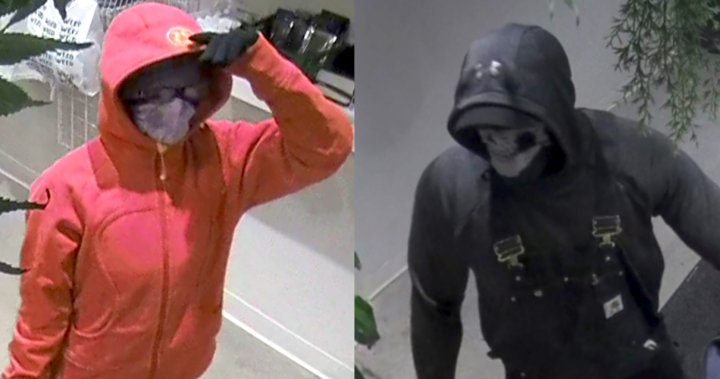 A cannabis store was broken into on Sunday evening, according to Kelowna RCMP, who are asking the public for help in locating two suspects.

Police said a man and woman entered the Lawrence Avenue store at 10:45 p.m. and demanded money from an employee.

â€œThe couple threatened the employee with a gun and fled on foot with undisclosed cash and merchandise in store,â€ said Cpl. Tammy Lobb.

â€œKelowna RCMP and Dog Services searched the area but were unable to locate the suspects. “

Police, who noted that no one was injured during the theft, released images of the two suspects.

The suspect is described as tall and muscular. He was seen wearing a dark gray Under Armor hoodie with black overalls, black gloves and a face mask with a skull motif.

The female is described as being of medium height with a small build with frizzy red hair down to the shoulders. She was seen wearing a faded orange or red Lululemon hoodie with light blue jeans, black gloves and a light colored face mask.

“Investigators believe this was a targeted theft and are encouraging other cannabis stores to be vigilant in their security measures and report any suspicious activity to their local RCMP detachment,” said the RCMP. Kelowna.