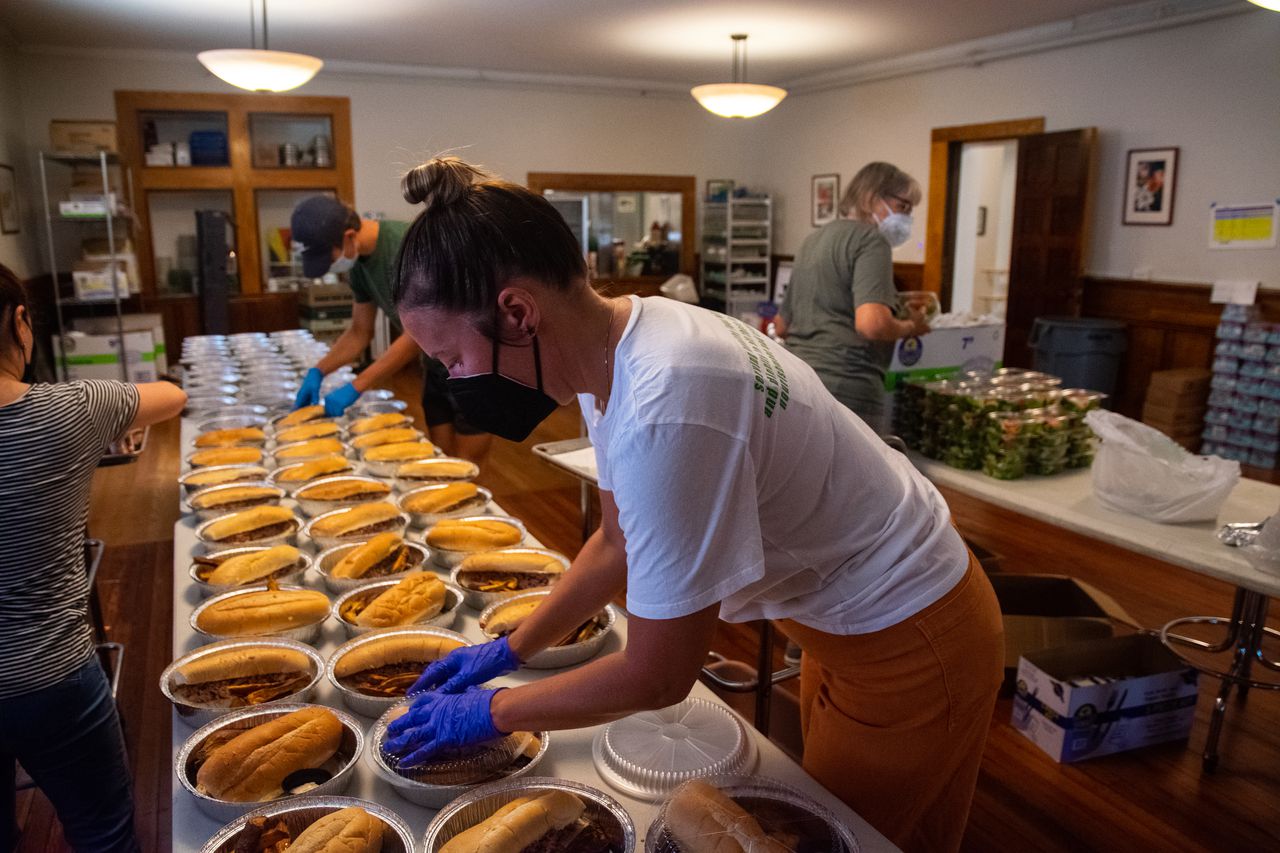 One Meal or More, No Questions Asked: Manna Community Kitchen Feeds the Pioneer Valley, Without the Stigma

Have one meal, have two, have four, but rest assured, no one at the Manna Community Kitchen will question or judge you.

Six days a week at a church in Northampton, volunteers spend the morning preparing a restaurant-quality dining option for anyone who might use it. Lunch is approaching and a crowd is lining up, and meals are there to be eaten, whether a person has a roof over his head or not, whether he has a job or not, whether he came to eat yesterday or before- yesterday or never before.

Food is offered for free and without shame. It’s not a soup kitchen, said Manna treasurer and cook Lee Anderson. The organization dropped that designation years ago, preferring to ditch the connotation it brought to Oliver Twist and oatmeal dropped in buckets.

“I have friends who are single parents. They were just saying, “I don’t want to take from someone who needs it more,” Anderson said. “But it’s for all of us. We have plenty. We are in a valley full of abundance.

Food insecurity has a way of hiding in plain sight. When their child wants to play in the local basketball league this season or needs school supplies, parents may be inclined to cut the food budget for a few nights.

“You don’t have to do this,” Anderson said. Come here, release that money and go to the movies with your child. Food is the first thing that gets pushed aside when your finances are tight. »

Monday through Thursday, Manna serves meals at St. John’s Episcopal Church on Elm Street. On Fridays and Saturdays they move to Edwards Church on Main Street. Doors open at 11:30 a.m., except for the 6 p.m. meal on Wednesday.

Manna has been running for 35 years, said Kaitlyn Ferrari, the organization’s director of development. Today, they average about 1,200 meals a week, serving dozens of guests in person each day and dozens more by delivery, all with the amount of food they need.

“We don’t get asked questions,” Ferrari said. “If someone asks for four meals, we will give him four meals.”

About a quarter of the meals are meant to be delivered to people who are housebound or simply unable to come to church in person to pick up food.

Finding volunteers to deliver can be difficult, and the cost of transportation doesn’t help, even though more people than ever are asking for food deliveries.

Over the past few weeks, an unlikely corporate hand has stepped in to help.

DoorDash — the company that lets drivers sign up to deliver restaurants to customers’ doorsteps — began partnering in 2018 with government and nonprofits to facilitate deliveries that have a social impact. Since linking up with Manna in August, DoorDash has paid its drivers $5 per bag to deliver meals for the community kitchen.

About 60 people requested deliveries a month ago. When DoorDash started shipping, that number jumped 10 in the span of two weeks.

Manna is proudly known for its varied and nutritious meals, Ferrari said.

On a recent Monday, the midday meal Anderson whipped up in St. John’s might as well be found at a downtown sandwich shop — a ham grinder, sweet potato fries, a banana, a salad, a cake chocolate.

“Everyone gets a salad. Everything is locally sourced. Lettuce, tomatoes, beets if in season,” she said. “We really try to think seriously about the food we prepare. We’ll find out one of our guests, their mom used to do something, so we’ll do it next week.

“Once you eat our food and meet the people who hang out here, you realize you know it’s no different than a restaurant in town,” Anderson said.

In addition to physical food, Manna hopes people who arrive for a meal receive the social food that a community can provide.

“Everyone is human and deserves not just food, but someone to talk to,” Ferrari said.

In the kitchen of St. John’s Church, as staff prepared dozens of meals for the Monday crowd, Alison Ryan from Sunderland and Jeannine Clark from Florence stood at their prep stations, filling cups with aioli and packing corn cobs.

Ryan, the community engagement liaison for Trulieve, a cannabis dispensary in North King Street, was working in a kitchen for the first time. She previously volunteered through her work with Habitat for Humanity and the Food Bank of Western Massachusetts.

“I think there is definitely a need for [the community kitchen] in Northampton,” she said.

Clark retired six years ago from a job with the Office of Environmental Health and Safety at the University of Massachusetts Amherst.

She came to Manna just under three years ago, hoping to give back to her community.

“I always imagined it could have been me there,” she said, “if I had made the wrong decision in my life.”

With the doors open and the meals flowing, a Ludlow man took his grinder outside, where a dozen people sat in a tent having lunch.

He first came to the community kitchen about a month ago and was amazed at the quality of the food he received. He doesn’t often buy vegetables, but sometimes finds crates of them thrown in a dumpster behind a restaurant or grocery store.

He showed his chocolate cake, his salad with fresh vegetables, fruits, sweet potatoes and the remaining half of his sandwich.