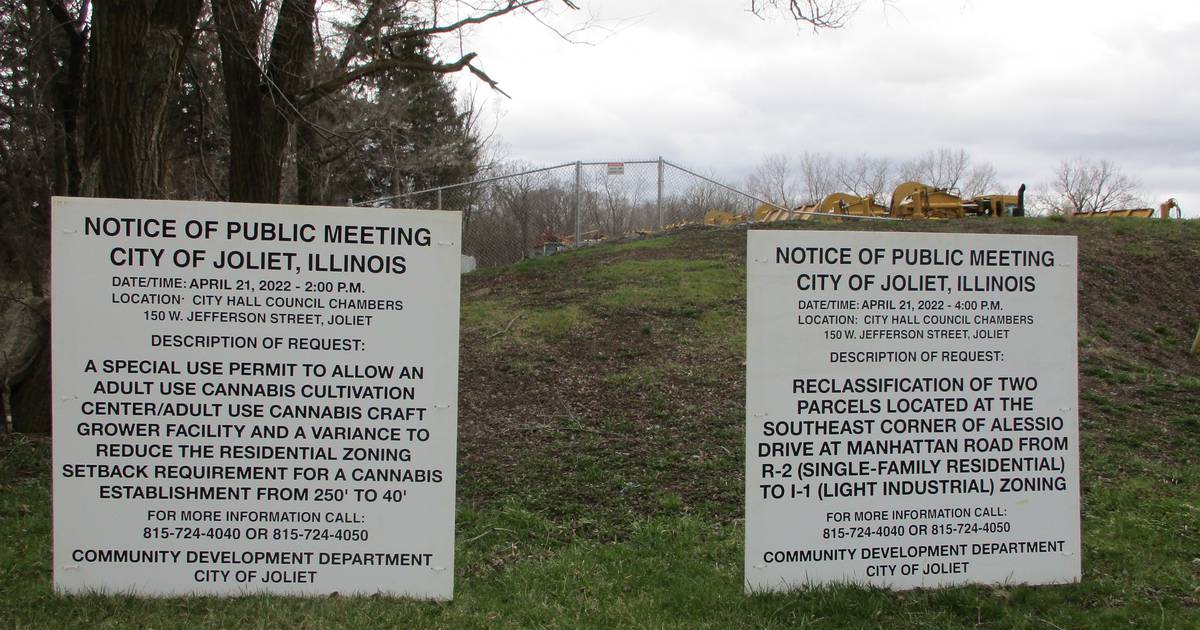 Residents oppose a proposed development of a cannabis farm in Joliet near the Sugar Creek neighborhood.

The proposed cannabis farm would be at the corner of Manhattan Road (Route 52) and Alessio Drive on land owned by members of the Alessio family who have a construction business in the same area.

It is an area that is a mixture of residential, commercial and industrial development.

The East Side Church of Christ is across Alessio Drive from the proposed cannabis cultivation facility.

On the other side is the Sugar Creek neighborhood, Richard Welch and some of his neighbors are worried about the proposed cannabis operation.

At a community meeting with the Alessios on Tuesday, residents raised concerns about the odors after reading reports of skunk odors coming from cannabis grow operations.

“I asked them who wanted to go out in their garden in the morning to have a coffee and smell the marijuana?” Welch said Thursday.

Welch said residents didn’t get good responses and the meeting “didn’t go well,” particularly when a comment was made threatening to bring a trucking operation to the site if the cannabis plant was not approved.

The plan must be approved by the city.

The plan is submitted to the Appeal Board and the Joliet Zoning Plan Commission for review on April 21. The city council would also have to approve certain aspects of the cannabis facility’s construction plan.

The Alessios need a special user license for a cannabis operation.

They also need a variation on a city requirement that cannabis operations be 250 feet from residential areas. This distance would be reduced to 40 feet under the proposed variation.

Parts of the site should also be rezoned from residential to industrial.

But when Megan Cooper came to a city council meeting on Tuesday to oppose the project, city officials said they knew little about it.

“I don’t know if their plan is ready yet. I’m still thinking about it,” Tropper said. “Obviously we have concerns from the locals.”

Michael Alessio said Thursday it was too early to discuss the site plan.

“All of our plans right now are conceptual,” Alessio said, adding that changes are being considered “based on the concerns we’ve heard.”

While the project has yet to be approved by the city, neighbors said trees at the site were felled last year and fill was added for what looked like a potential construction site.

“They cut down so many trees that they drove the wildlife away,” Welch said.

Alessio said there has been no new construction on the site.

The site along Manhattan Road at Alessio Drive sits at the northern end of an industrial park that includes an Alessio & Sons construction facility.

Alessio said the company has been storing construction equipment at the site for years.

It’s on! The list of the most pot-friendly cities ranks Portland “high”