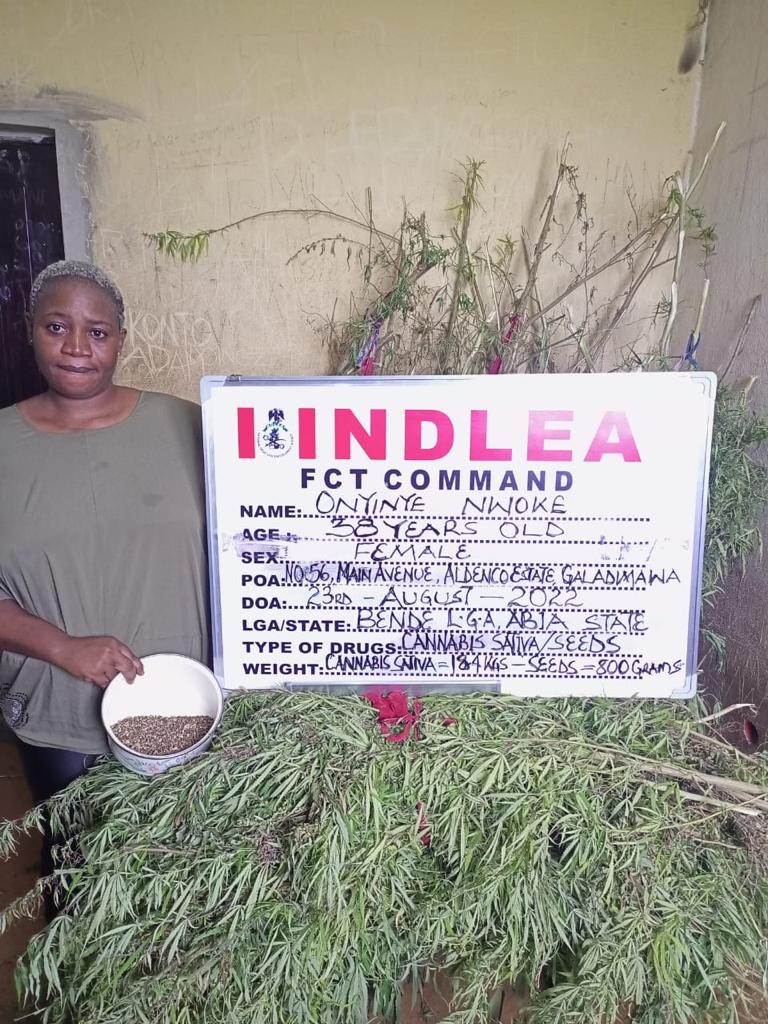 NDLEA arrests woman for planting cannabis in her Abuja residence

The 38-year-old businesswoman was arrested following a raid on her residence, House 56 Aldenco Estate, Galadimawa in Abuja, where NDLEA officers uprooted fresh stems of cannabis plants grown in the backyard of the house.

This was revealed via a statement issued on Sunday by NDLEA spokesperson Femi Babafemi.

Babafemi noted that the uprooted plants weighed 18.4 kg while 800 grams of cannabis seeds were also recovered from the house.

He added that troops from the 81st Division of the Nigerian Army handed over to the Lagos Command of the NDLEA 792 blocks of cannabis sativa smuggled from the Volta region of Ghana to Ogun State.

He said the drugs were intercepted at a checkpoint along the Ilaro-Benin border.

Babafemi further said that in Niger State, NDLEA officers on Thursday intercepted a truck transporting animal feed from Lagos to Kaduna with 449 compressed blocks and 111 bags of cannabis sativa weighing 1,531 kg belonging to a dealer. in Zarya.

The anti-drug agency spokesperson said the consignment of drugs was loaded onto the truck in Akure, Ondo state, adding that the truck driver, Yahaya Sani, his assistant Samaila Rabiu , his engine boy Bilal Ibrahim, representative of cannabis owner Awolu Isyaku, and a passenger Mustapha Abdulrahman were all arrested.

“In Sokoto, officers intercepted a commercial bus on Saturday September 3 from which two CD changer players were recovered along the Sokoto-Bodinga road. During the search, 5.5 kg of cannabis were found inside the CD players and the owner, Nasiru Ibrahim, arrested while on another bus, suspected bandit Sani Ibrahim, 37, was arrested with ammunition and cannabis sativa along Kware road,” Babafemi added.

Speaking on the arrests and seizures, NDLEA President/CEO Brig. General Mohamed Buba Marwa (Retd), has praised agents of the anti-drug agency just as he instructed them and their compatriots across Nigeria to step up the pressure on drug cartels in the country while balancing their supply reduction efforts with drug demand reduction activities.

Watch the videos below:

No ‘green rush’: TC’s non-medical pot licenses are below the maximum | Local News