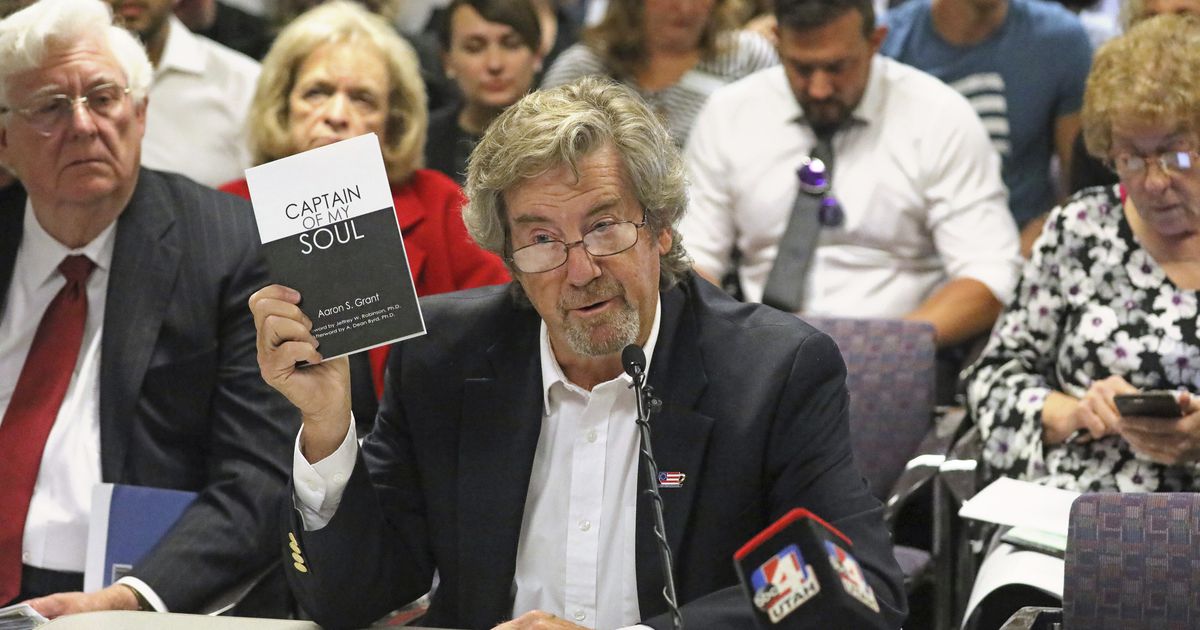 (Rick Bowmer | AP file photo) Stephen Graham, president and CEO of Standard of Liberty, speaks during a hearing Thursday, September 26, 2019 in Salt Lake City. LGBTQ people who say they suffered shame and suicidal thoughts after receiving gay conversion therapy urged Utah state officials to approve a proposed rule banning psychologists in Utah from the already banned practice in 18 states. Opponents who spoke at the hearing countered that the rule should be tabled because they argue it will prevent parents from getting help for their children with “unwanted” homosexual feelings.

In an interview with The Atlantic, Utah Senator Mitt Romney revealed he uses a secret Twitter account to keep tabs on political conversations. His pseudonym? Pierre Delecto. [Trib]

At the head of the news: The Church of Jesus Christ of Latter-day Saints suggests that a proposal to ban “conversion therapy” for minors would put a muzzle on therapists trying to help young people; advocates argue it would simply ban a widely discredited practice that harms members of the LGBTQ community. [Trib]

-> Utah’s payday loan industry is suffering, with one in four stores closing in the past three years. [Trib]

-> Despite last minute calls, Legacy Parkway will see a new 65 mph speed limit and the end of the truck ban on January 1. [Trib] [DNews] [Fox13]

Tweets of the day: Of @UTJolley: “It’s time we taxed yoga. Namaste that, hippies.

-> From @dandrezner: “I may be just a simple political scientist from a small town, but I think the quid pro quo can happen without saying the words ‘quid pro quo’. “

Also in the news: A representative of the National Alcohol Beverage Control Association said on Friday that Utah sits at a “sweet spot” between consumer access to beer, wine and spirits while considering health concerns and drinkers. minors. [Trib] [DNews] [Fox13]

-> Zipline operators at Provo Canyon Adventures won their land use battle with the Metropolitan Water District of Salt Lake and Sandy in the Utah Supreme Court last week. [Trib]

-> After a two-year stint as US Ambassador to Russia, Jon Huntsman Jr. looks back on his diplomatic experience, getting to know Russian President Vladimir Putin and his next steps in Utah. [KUER]

-> With the cold winter months on the way, Salt Lake City area homeless shelters are appealing for donations as more people ask for help. [Trib] [KUER]

-> A group of designers have created logos for over 20 Salt Lake City neighborhoods, from Rose Park to Sugar House. [Trib]

-> A new Veterans Resource Center opening in North Logan next month will provide connections for those in need of housing, employment and health care. [DNews]

-> Following accusations from rivals that she is not being candid about how she funds Medicare for All, 2020 presidential candidate and Massachusetts Senator Elizabeth Warren said on Sunday that she plans to roll out a plan with more details in the coming weeks. [Politico] [CNN] [NYTimes]

-> President Donald Trump has reversed his decision to host the next G7 summit at Trump National in Doral, Florida, after facing a bipartisan backlash to the plan. [CNN] [NYTimes]

-> After lackluster debate performances, a recent delay in fundraising and attacks from Trump, presidential candidate Joe Biden faces growing anxiety about his candidacy for the post of commander-in-chief. [AP]

Do you have any advice? A birthday, a wedding or an anniversary to announce? Email us at [email protected] If you haven’t already, sign up here to receive our weekday email to send straight to your inbox.