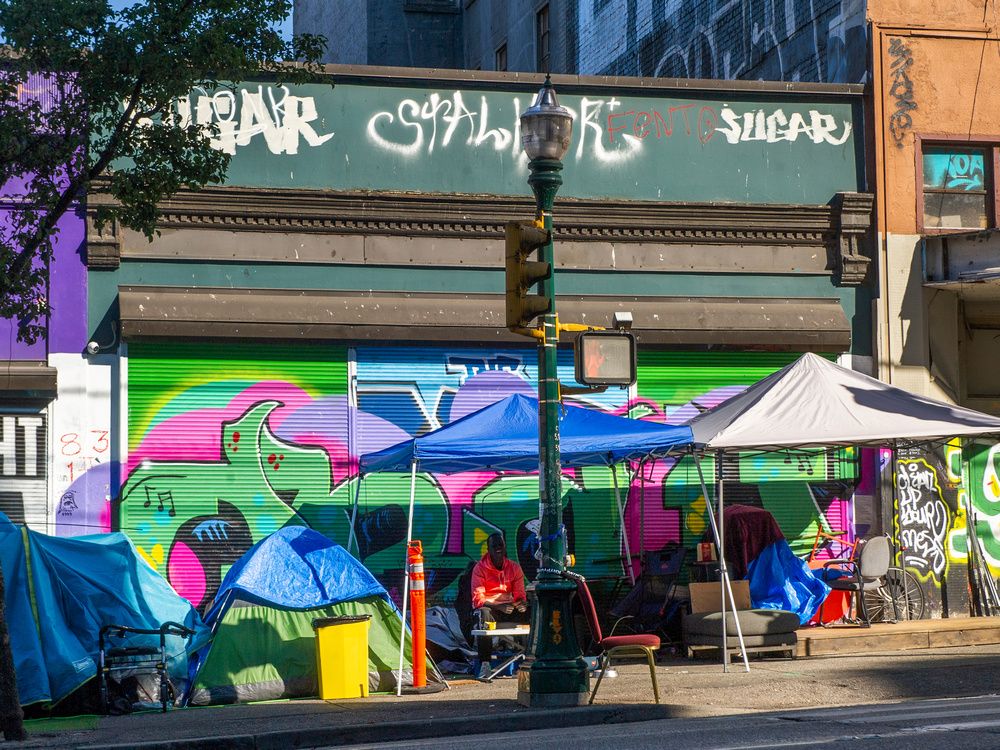 To residents of the Downtown Eastside, the Blue Door offered cheap cannabis to the poor with chronic health conditions.

For police and the BC government, the people behind the storefront at 151 Hastings St. have profited from illegal pot sales for more than a decade and used the proceeds to buy millions of dollars in real estate.

Start your day with a roundup of BC-focused news and views delivered straight to your inbox at 7 a.m., Monday through Friday.

The next issue of Sunrise presented by Vancouver Sun will soon be in your inbox.

A lawsuit filed Sept. 14 by the Director of Civil Forfeiture says Shannon and David Bauman, along with the Real Compassion Society, “operated or facilitated the operation of an illegal cannabis retail store at 151 East Hastings St. owned and/or illegally sold cannabis, cannabis products and/or illicit cannabis since 2010.”

The government agency wants 11 properties owned by the Baumans, worth nearly $15 million, handed over as “instruments of illegal activity.”

The lawsuit says the spouses were each directors of the company, which ran the East Hastings store in a building owned by Shannon Bauman.

“At all times, S. Bauman and D. Bauman have received, directly or indirectly, material and/or financial benefits from the operations of the Real Compassion Society,” the director said.

The blue door closed on February 28 when the provincial government’s Community Safety Unit, accompanied by Vancouver police, raided the unlicensed store and found over $48,000 in cash and “more than 500 pounds of dried cannabis in Ziploc bags.

Some of the money was stuffed into three cash register drawers. Some were in five 20-litre buckets and a crate of milk, according to the lawsuit.

There were “signs taped to a glass partition on the front counter showing only cash and prices for various cannabis products for sale and two ATMs and a bitcoin machine,” the documents say. “The money was bundled or packaged in a manner inconsistent with standard banking practice.”

The properties the government wants to seize were purchased individually or jointly by the Baumans between January 28, 2015 and June 29, 2022. Some have mortgages granted by individuals who were unaware of the allegations, the statement said.

Four condos listed in the suit and purchased in Vancouver in recent years have current valuations ranging from $303,000 to $1,535,000. There are also four other Bauman properties in Chilliwack wanted for forfeiture ranging in value from $594,000 to $1,389,000.

The most expensive property in the claim – a home in West Vancouver valued at $4.1 million – was purchased by David and Shannon Bauman on June 29, 2022 for over $4.9 million.

Neither faces criminal charges, but Shannon Bauman was fined $30,000 on Aug. 31 for operating a business without a license, provincial court records show.

None of the Baumans could be reached for comment. No statement of defense has yet been filed. Shannon Bauman did not respond to a message sent via Facebook.

Sarah Blyth, executive director of the Overdose Prevention Society, said Friday that the blue door was a boon for residents of the neighborhood.

“Closing the blue door has been detrimental to the community,” said Blyth, who had not heard of the civil forfeiture case until contacted by a Postmedia reporter.

She said she hoped the lawsuit would not impact her group’s location at 141 East Hastings.

“They are our owners. It stresses me out to think that we just moved to this site. It would hurt us to have to move again,” Blyth said.

The Director of Civil Forfeitures alleges that “some or all of the funds used to acquire and/or maintain (Baumans’) property were the proceeds of illegal activity and/or tax evasion.”

More news, less ads: Our in-depth journalism is possible thanks to the support of our subscribers. For just $3.50 a week, you can get unlimited, lightweight access to the Vancouver Sun, The Province, National Post and 13 other Canadian news sites. Support us by subscribing today: The Vancouver Sun | Province.