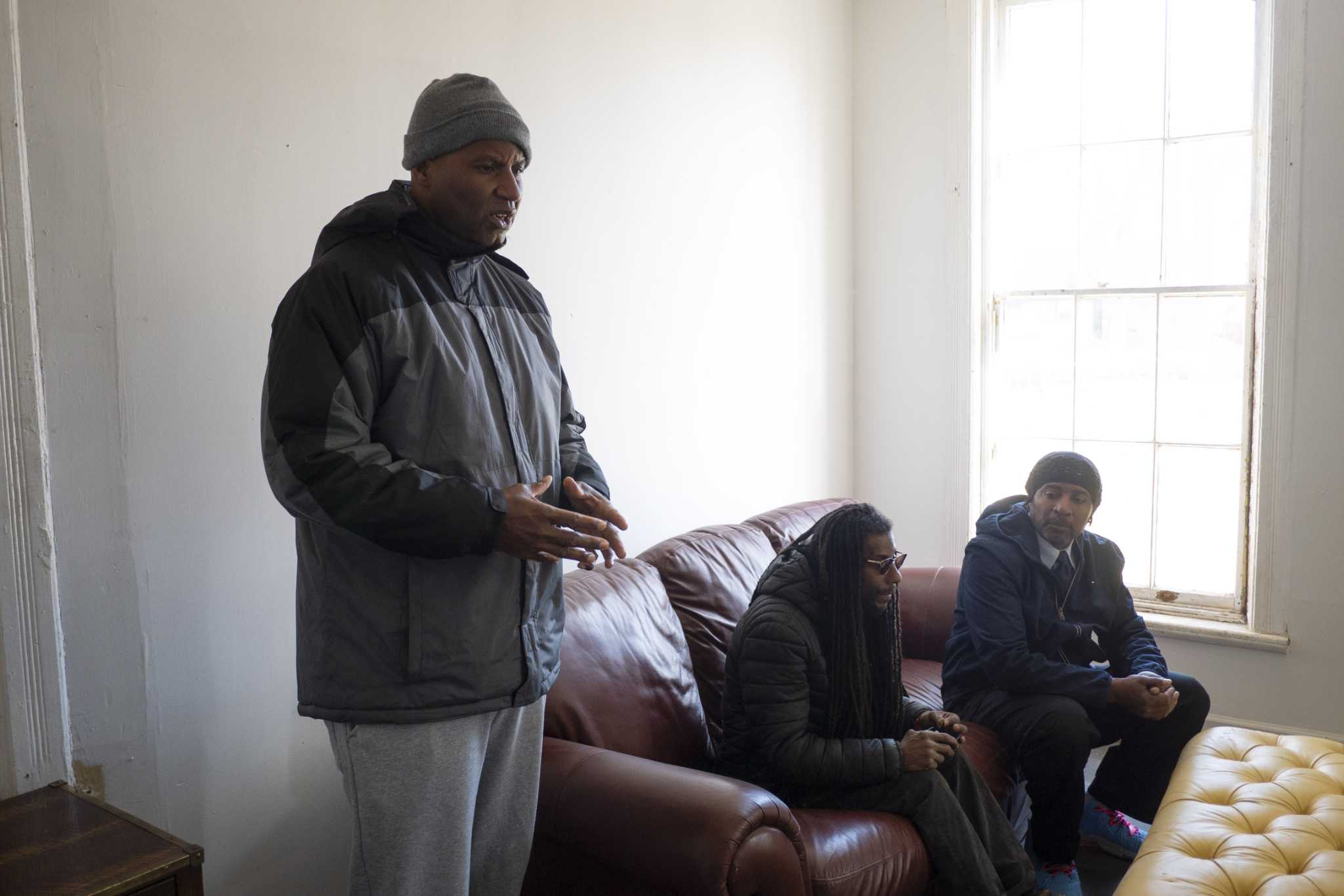 Albany’s Robinson family want to take over the marijuana business

ALBANY – They once ran the marijuana business in large swathes of the city.

And as New York prepares to allow recreational cannabis sales, the Robinson family members want to be the first in the state to legally supply the product that landed several of them in federal prison. .

Not second, not third, not down the line. First.

During a 90 Minutes interview earlier this year, several members of the Robinson family discussed why they should have this distinction, why they believe they were unfairly targeted by the city and law enforcement, and the impact of the investigation on their family.

They plan to be among the hundreds, if not thousands, of New Yorkers who will later this year apply for one of approximately 100 conditional licenses to sell recreational cannabis as part of the state’s plan to give to those who have already been convicted of marijuana the first crack at a potential multi-billion dollar market.

“My feeling is that we have to be first in New York State,” former councilman Mark Robinson said. “Well, (to those who say) ‘Mr. Robinson, why would you say the first? … If you do your research, I don’t think there’s another family in New York State who’s been sent to jail for (low-level) marijuana sales. Because that was all it was.

The family history is more complicated than that.

For more than a decade beginning in the early 1990s, Mark and his brothers Charles and Steven and his half-brother Eddie were among those openly selling marijuana on North Swan Street in the city’s Arbor Hill neighborhood. And while the Robinson brothers were far from the only people in town selling marijuana at the time, the family name had cachet — and they were cheeky about their activities, including speaking with The Times. Union for a May 2000 profile. (“Ever seen a rainbow, and at the end of the street is the pot of gold? Well, it’s the pot of gold,” said Mark Robinson to reporter Brendan J. Lyons as he surveyed Swan Street.)

They knew what a criminal amount of marijuana was and were rarely caught with larger amounts. While the family members were investigated on suspicion of having participated in violence related to their illicit activity, local prosecutors were never able to convict them of violent crimes. (Steven Robinson’s criminal history includes a conviction on federal charges of using a firearm in pursuit of a drug conspiracy and killing a bystander while allegedly shooting a drug dealer rival – but the homicide conviction was later overturned by a federal judge who cited what he said was weak evidence.)

And while state and local police were well aware of their activities given the number of low-level arrests the Robinsons racked up over the years, the feds paid no attention until as the Times Union showcases his Swan Street business and his ability to evade serious charges.

In 2001, a federal task force arrested the brothers and several others. They were charged with a number of crimes, including conspiracy to distribute marijuana, money laundering and the use of firearms in connection with these drug sales.

“They certainly appear to have perfected or at least understood the drug laws of New York State,” Daniel French, then U.S. Attorney for the Northern District, said at the time of their arrest. “I’d like to give them a better understanding of federal drug laws.”

The indictment alleged that the family distributed more than 100 kilograms of marijuana and earned more than $500,000 over a decade. They also accused Steven Robinson of killing a man Robinson was friends with in a drive-by shooting in October 2000. He was the only one to stand trial and was found guilty on all counts before the homicide conviction is overturned. The rest accepted plea deals.

It was the latest step in a years-long effort to eradicate their network.

After the brothers got out of jail, they started another home rehabilitation business in Arbor Hill and West Hill. Like their marijuana sales, it was a family affair, an attempt to rehabilitate their legacy, Charles Robinson told The Times Union in 2013.

The investigation, the ensuing media coverage and the lawsuits had left the whole family embittered. And they believe it killed their mother.

“She got sick every day walking into a federal courthouse and seeing these people do this to her kids,” Mark Robinson said.

Now, as New York State is poised to become one of the largest cannabis markets in the country, the Robinsons say a conditional license would be a step toward redressing what they believe be an overzealous pursuit.

Steven Robinson, the smallest of the three brothers during the interview, sat quietly for most of it. When speaking, he asked to speak off the record due to his emotion when speaking about the impact the prosecution has had on him and his family.

Charles “Obar” Robinson, the older brother, saw the family’s experience through the lens of black and brown residents unjustly targeted by lawsuits for a drug widely used in American society. He hopes they can leave something to build their family on; he remains skeptical of public promises made to right past societal wrongs.

There are many critics of the idea that the Robinsons and other marijuana convicts should go to the front of the line to sell recreational marijuana.

Earlier this year, in an interview on WAMC, Albany County Attorney David Soares criticized the state’s proposal. “Rewarding people who have been at the forefront of these offenses is, to me, breathtaking,” he said. “You’re just rewarding people who commit crimes in these communities.”

Others take a more nuanced view of the Robinsons’ claim.

A community leader who once cleared a city park of drug dealers to make way for a children’s sports program and who pushed the city to crack down on illicit drug trafficking in Arbor Hill says he doesn’t see no difference between the Robinson family and the people of Albany who smuggled in to run the city’s political apparatus.

Aaron Mair, then president of Arbor Hill Concerned Citizens, remembers having a long discussion with Charles Robinson about making the park at the corner of Lark Street and Manning Boulevard a safe space. Charles Robinson later sponsored one of Mair’s supervised baseball teams.

“Working in this context as president of a neighborhood association, without glorifying illicit activities and calling for active action (to stop them), we recognize that they were there and we had a dialogue”, a- he declared.

Mair, who is now campaign manager for Forever Adirondacks, made no apologies for the Robinsons or others in the drug trade. Children were forced through open-air drug markets. People of all ages were shot and killed.

But he sees the hypocrisy in local smugglers being romanticized because they then entered the county’s upper crust and middle class when black residents like the Robinsons don’t get similar treatment.

“As we talk about the raids and the federal arrest of the Robinsons back in the days when they had this dust with the law, it still has never been matched or pale in comparison to the rigid and open corruption where literally the criminals ran the city under the O’Connell and Corning machines,” he said, referring to the Democratic machine that ran the city for most of the 20th century.

The Robinsons doubt that the state will keep its promises to benefit those with past beliefs.

The state Office of Cannabis Management has drafted an initial set of regulations that would see more than 100 conditional dispensary licenses granted to people who had previous convictions for marijuana-related offenses and who are cannabis owners. successful business. These dispensaries are said to be supplied exclusively by a group of New York hemp growers who have themselves obtained conditional licenses to grow and process marijuana.

Despite skepticism about how the state will include and support so-called “legacy” operators, the board responsible for licensing recreational marijuana businesses said it wants that to be the case.

“The Office of Cannabis Management is working hard to make the legal cannabis industry as accessible as possible to all New Yorkers, including those who have participated in the legacy market,” the CMO spokesperson previously said. , Aaron Ghitelman, at The Times Union, asked about specific plans to bring veteran marijuana dealers into the new industry.

Anthony Gaddy, president of the Upstate Black Chamber of Commerce, said he’s also not sure the state’s licensing process will work to achieve the goals he’s set. was fixed.

“We try to be cautiously optimistic and patient – but, you know, we have concerns,” he said.

Gaddy declined to speak specifically about the Robinsons, but said he knew they planned to apply for a license. Gaddy is planning a series of talks and events to help potential local operators. But he said just getting a license is no guarantee of success.

“You always have to have the business acumen and the resources to plan the team,” he said. “While we’re excited about this, and I’m sure everyone is in terms of revenue projections…if we don’t get it right, we might end up doing more harm.”